Department of Materials Science and Engineering
Chair of Polymer Materials

In the recent work from Dr. Muchao Qu, a slight deviation from the foreseen trend was recently observed for ternary PMMA nanocomposites containing carbon nanotubes (CNT) and carbon black (CB). In the research with simulation from 2019 to 2020, the reason for the deviation was examined. Representative composite geometries were generated with Monte-Carlo technique and the composite conductivity was calculated with Finite Element Modelling (FEM). Traditional FEM strategies would give results resembling the ternary mixing equation, but when the CB particles were modelled as solid spheres whereas the CNT were modelled as solid cylinders surrounded by soft, conductive shells, the composite conductivity gained the same shape as observed experimentally.

The following was concluded from the research:

1. Compared with other theoretical and experimental results, the pathway-finder algorithm, in which the connection possibility was deduced from the reachability matrix, proved to be effective.
2. A synergistic effect can be obtained in the ternary CPCs of CNT and CB. It is obvious that in the simulation, the synergasm can be obtained by a higher filler fraction around 8% filler fraction of CB, and 1% filler fraction of CNT, where in the experimental data it is 5% of CB and 2% of CNT. The results fit the theory of novel theoretical self-consistent mean-field approach published by Schubert in 2017[1].
3. In the simulation, the effect of carbon fiber to enhance the conductivity is larger than in the experiments with a factor of 112%, while the relative carbon black is smaller with a factor of 79%.

In addition, the LSP simulation team added big data technology to the simulation platform, including data collection, data storage, data cleaning, data mining, and data visualization. The platform will intelligently analyze the calculated data and automatically eliminate abnormal data. With the embedding of various data technologies, the reliability and stability of the platform can be further improved. 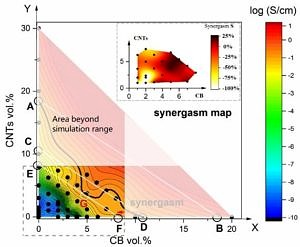 Figure 6.1.2.2 Logarithm of the composite conductivity vs. volume filler fraction of CNTs and CB in a contour plot diagram, defining a quantifiable “synergasm” between CNTs and CB. The inset synergasm map illustrates the synergasm effect of the different compositions of CNTs and CB from the previous chapter 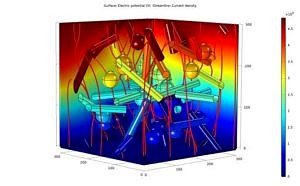 Figure 6.3.1.1  FEM simulation result with streamlines of current density with carbon black as spheres and CNT as capped cylinders. 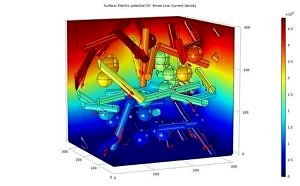 Figure 6.3.1.2 The current flow built up by both CNT and carbon black, which explains the synergasm of the both particles.