In fiber spinning, as with most polymer processing methods, molding is via the molten state of the polymer. Knowledge of the flow behavior of the polymer melt are therefore of immense importance. Viewed as a whole, in the spinning process both shear (e.g., in the extruder) and extensional flows (e.g., in the die or during drawing) occur. These can be characterized by rheological measurements. Application-specific shear as well as extensometer are available at the LSP. The knowledge of shear rheological behavior is not sufficient in spinning processes dominated by expansion currents. A transfer from the shear rate-dependent behavior of the viscosity to the extensional viscosity is not possible in most cases. Effects such as strain hardening (an increase in viscosity with increase in elongation) can not be detected in simple shear. 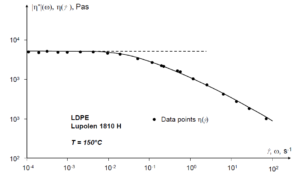 In addition to the process conditions, the flow behavior is significantly influenced by the molecular structure of the polymers. For example, a higher weight average molecular weight manifests itself in an increase in viscosity. The molecular weight distribution determines i.a. the expression of pseudoplastic behavior. Branching can lead to strain hardening, which in turn can result in a “self-healing effect” and stabilization of the process. Molecular characterization is performed at the LSP using gel permeation chromatography (GPC) coupled with light scattering (see picture). This makes it possible to determine decisive molecular weight averages (Mw, Mn) as well as a branching analysis. 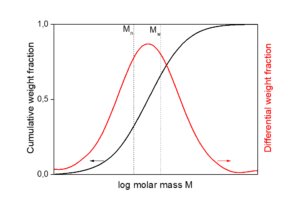 The combination of molecular and rheological characterization makes it possible to differentiate between different materials and mixtures in terms of their flow behavior, to interpret the behavior in the spinning process and, ideally, to be able to make a prediction about ideal formulations. The experimentally obtained parameters continue to serve the simulation as practical parameters.